India is the largest producer of films. Indian Film Industry has gifted many children based movie which inspire children as well as adults. Children movie earlier revolved around  giving an adventure and fantastic right to kids. The perceptive of Indian Cinema towards the kids has been changed and so how the taste of the audience. Children Movie are much more mature then many of the other adult movie puts together. Movienasha brings to you Top 10 Bollywood children movies which should be watched and absorded by the adults too. Here, almost all the movie listed below i personally watch and inspired me a lot. Numbers here are in any random order and does not suggest level of greatness in the movie. Please leave comment if you think differently and have something in mind which you want me to notice.your comments are most welcome! I must say to all that you must watch the movie which are listed below:- 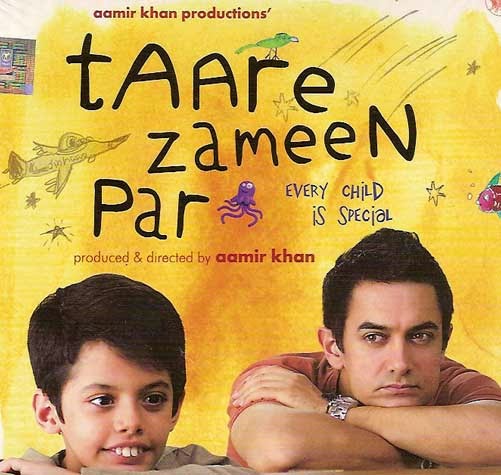 Taare Zameen Par (Like Star on Earth) is one of the best Indian Children movies directed by Aamir Khan. It was released in 2007 starring Darsheel Safary, Aamir Khan, Tisca Chopra, Vipin sharma, Sachet Engineer, Tanay Chheda.It is written by Amole Gupte  and was a block buster Hit at Box-office. The movie open the eyes of the parents who are obsessed with their children marks sheet rather than their happiness. The movie explores the life and imagination of eight-year-old Ishaan. The movie has received numerous awards. The movie is not a sad story but has instances which will make you laugh as well as cry. It is a heart touching story of dyslexia child. 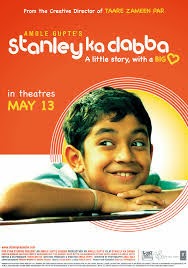 Stanley ka Dabba is one of the leading children movies directed and produced by Amole gupte. It was released in 2011 starring Divya Dutta, Partho Gupte, Divya Jagdale, Raj Zutshi, Amole Gupta. This is the movie that will take you back to your school days.sharing your tiffin box, chatting with your friends on the last bench, ganging up against a cruel teacher, this movie has it all. A heart touching story and a simple narrative makes this one of the most popular children movies of all times. The movie is  about a boy named Stanley who never brings tiffin to school and all the kids are more than happy to share their with him. I am Kalam is a movie based on Children directed by Nila Madhar Panda. The plot revolves around Chhotu, a poor Rajasthani boy, who is inspired by the life of the former President of India, A.P.J Abdul Kalam and his strong desire to learn. It was released in 2010 starring Harsh Mayar, Gulshan Grover, Pitobash Tripathy Beatrice Ordeix.The chararcter of Chhotu has been performed by Harsh Mayar, a delhi slum boy. The movie has received many awards and honors. It is showcased in various film festival. It is the first film ever in India produced by a development organisation.One day Chhotu watches Preident Dr.A.P.J Abdul Kalam on television and it inspires him. Chhotu changes his name to Kalam and decided to become someone who wears a tie and who is respected by others. 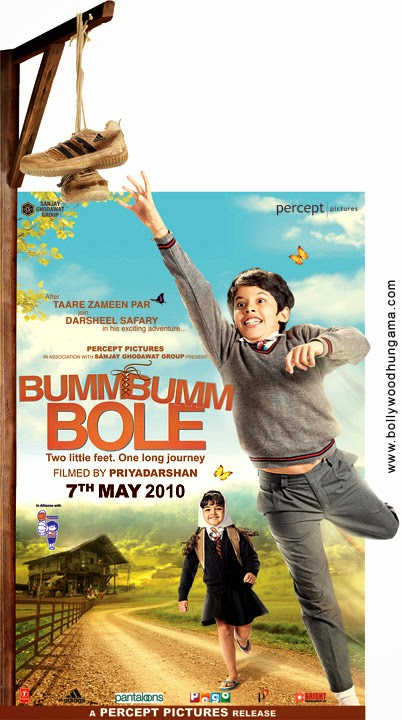 A Bum Bum Bole is one of the top children movies directed by Priyadarshan and released in 2010. The film starred Taare Zameen Par’s wonder boy Darsheel Safary and Ziya Vastani. The film is the Indian version of the 1997 Iranian film Children of Heaven. The simply story of a brother and sister and a lost of pair shoes. The title of the movie is based on one of the songs of Taare Zameen Par. Chararcter development is very popular in this film. In this movie Rimzim cannot go to school without her shoes. They work out a scheme where both of them share the same shoes. Rimzim will wear them to school in the morning and hand them off to Pinu at midday so he can attend afternoon classes. They don’t have enough money for shoes and uniform. The film ends with Rimzim finding out that she will not get a new pair of shoes  but there is a quick shot of their father’s bicycle that shows what appears to be red shoes with red trimming for Rimzim and another pair of white basketball shoes for Pinu. 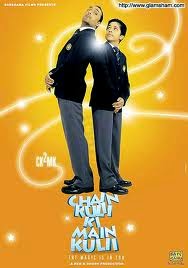 Chain Ki Kulli Ki Main Kulli is a movie which is construct on children’s life directed by Kittu Saluja. It was released in 2007 starring Rahul Bose, Zain Khan, Susheel Parashara, Rajesh Khera, Nasir Kazi ,Raj Bhansali. The movie title is taken from lines spoken by Amitabh Bachchan’s character in the 1982 film Satte Pe Satta. This film is based on the Hollywood movie Like Mike in which thirteen year old boy finds sneakers once belonging to NBA legend Michael Jordan. Cricketer Kapil Dev also makes a cameo appearance in the film. Karan is a thirteen year old orphan boy who lives in a dilapidated orphanage owned by stern,uncouth warden, John “Hitler” Kakkad.Karan has two dreams: one is to have parents and the other is to be a big crickter. 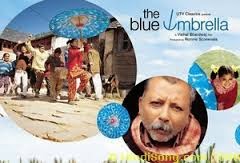 The Blue Umbrella (Hindi:Chatri Chor) is a movie based on the novel, The Blue Umbrella,by Ruskin Bond and directed by Vishal Bhardwaj. It was released in 2005 starring Pankaj kapoor, Shreya Sharma, Deepak Dobriyal. Ruskin Bond who is known to depict children based themes in his novels, was impressed with Vishal’s interest in child centric stories. The story is set in a small village near Banikhet, Himachal Pardesh and revolve around a young girl Biniya and village’s only shop owner Nand Kishore Khatri. 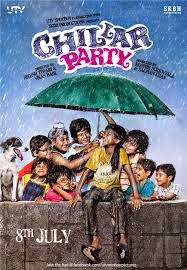 Chillar Party is a Indian Children’s Film directed by Nitesh Tiwari and Vikas Bahl and produced by Salman Khan and Ronnie Screwvala released in 2011. The film features Irfan Khan, Rohan Grover, Sanath Menon, Naman Jain, Aarav Khanna, Vishesh Tiwari. It also features Ranbir Kapoor in an item-number. This movie won the 2011 National Film Award for Best Children’s Film. The film is about a gang of innocent but feisty kids who lead carefree lives in Chandan Nagar colony that takes on the big bad world of politics when one of his friend’s life is endangered. Each of the eight children has his own identity and a nickname based on quality.example Akram is the fast bowler, Encyclopedia is the mastermind. Not only that,but their whole team has a nickname- Chillar Party. 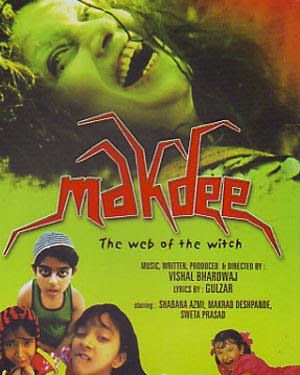 Makdee promoted as The Web of the Witch,is a Indian Horror film, directed, produced and story  by Vishal Bhardwaj based on children. It was released in 2002 starring Shabana Azmi, Makrand Deshpande, Shweta Prasad. The film tells the story of a young girl in north India and an alleged witch in all mansion. The film is an intriguing story and mostly deals with superstition of rural India and the belief in witchcraft and wizardry. The film was critically acclaimed at the Chicago International Children’s Film festival Winning Awards as well. Life in chunni’s village is all fun, peace and quiet. She fools the villagers including her parents with her impersonation of her twin sister, Munni. In the village,there is a mansion that is said to be haunted and legend goes that a witch called Makdee resides here.

My Friend Ganesha is a story based on child of eight year old boy who feels lonely since his parents don’t have time for him and he doesn’t have any friends. As story moves on ‘Ganesha’ becomes his friend and together they resolve so many problems around and have a lots of fun. It was released in 2007 starring Ahsaas Channa, Kiran Janjani, Sheetal Shah, Upasana Singh. Ganesha comes in a Ashu’s home and things start turning around in their family.Ganesha becomes Ashu’s friend and together with him solve various problems of their family and have lots of fun. 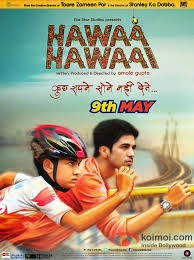 Hawaa hawaai is one of the best children movies. The film features Partho Gupte,Saqib Saleem,Pragya Yadav. It was released in 2014 and directed, produced, written by Amole Gupte. The film is a commercial entertainer, and a tribute to people who dare to dream. Saqib Saleem played role of a skating coach in the film. The plot centres around Arjun Harishchand Waghmare and his dream to skate. The film chronicles his coach Aniket Bhargava and Arjun’s journey towards being a champion skater. This movie is really beneficial for the offsprings and give inspiration to children. The film ends showing that Arjun nad his friends are admitted in a school and an article in the newspaper about Arjun.